Secret Government is a global strategy game about secret societies where you won’t rule countries as a king but as a kingmaker. You’ll lead the Brotherhood – an organization that juggles the whole world. The key feature of the game is the manipulation of powers. Instead of giving direct orders, the Brotherhood provokes countries into doing what the Brothers want.

Secret Government is a global strategy game about a secret society that has been discreetly ruling humanity for hundreds of years. You won’t lead any particular country, but the Brotherhood – an organization that manipulates the whole world.

The ultimate goal of the Brotherhood is a new world order. At the start of the game, you’ll choose the image of the world that you want to create as a Grand Master.

You will be sending your agents to various countries, looking for a way to recruit public servants and infiltrate power institutions.

You can manipulate one country or several at the same time using different combinations. You will be able to change the ruling power of the countries, their ideology, the well-being of estates, push countries to start wars or stop them.

All masters have their own unique features and abilities. You can choose what traits to develop, the way you want to develop them, and select the best brothers for a particular task.

Besides you, there is another global brotherhood that wants to change the world their way. This brotherhood recruits members of the government and manipulates countries too. You’ll often run into brothers in red robes, but don’t rush to attack them. Sometimes their actions can come in handy depending on the situation.

Act discreetly and carefully, otherwise, the government or another brotherhood will expose you.

You can’t attack a country in the game, but you can provoke war, peace, or alliance.

The well-being of the population and how wealthy the country can be depend on the economy. You can influence production, resource consumption by different estates or industries, and trade between countries.

Countries and people are alike. They are divided by estates, they have their own role in society, their own values and needs. They can be born, die, migrate and move from estate to estate. As long as you influence people, you’ll affect the country and its role in the world.

Everything is all connected in the game. For example, the shortage of steel for the production of weapons affects the combat power of the country. An attempt to increase the army to compensate for the decrease in combat power leads to the mobilization of peasants. A decrease in the number of peasants reduces the volume of food production, and this affects the extinction or migration of other estates, such as artisans. Artisans work in industries and produce luxury goods for export that replenish the country’s treasury. As a result, any decision made triggers a chain of consequences. The art of the Grand Master lies in his ability to change the world in the right direction, balancing on the edge and taking into account all the connections.

You won’t be playing for a country, but juggling the whole world. There are two historical periods available in the game: 1685 and 1775, including the political and territorial division of those years.

If you’re still not ready to build your new world order in a free play, then you can try on the role of the Grand Master in story campaigns. There are two campaigns in the game at the moment: the glorious revolution in England and the struggle of the thirteen colonies for independence in the New World. In each game mission, you’ll interfere in the main conflict of the period and move the world in the same direction as it happened in real life or change the story in your own way. 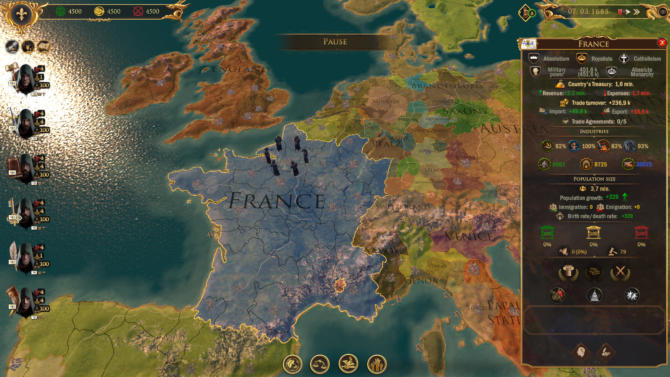 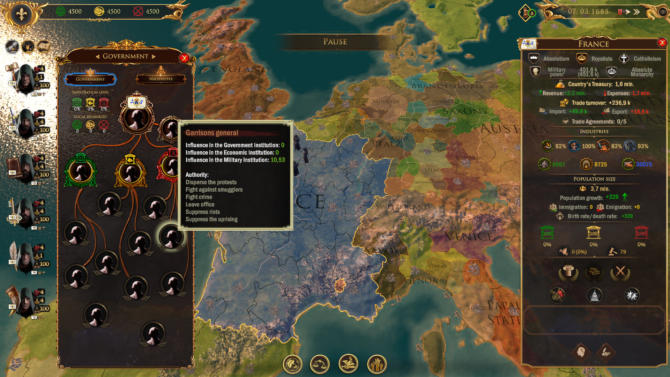