Rewrite the history of feudal Japan with an army of the ultimate guerrilla warriors: ninjas!

The shogun has fallen from power, plunging the land into chaos as feuding feudal lords scramble to take his place. But the shogun has an ace up his sleeve: you! As the head of a leading ninja clan, it’s up to you to rally your followers and help unify Japan!

As their fearless leader, you’ll need to train your fellow ninjas in the ways of modern 16th-century warfare–including the use of those newfangled matchlock guns! Assign them to infantry, cavalry, and other units to form an army fit for a shogun!

Of course, war is costly in more ways than one. Between battles, your followers will raise funds by producing food, handicrafts, and other goods to sell to passing travellers.

Arm your ninjas with the best gear, training, and skills and lead them to victory in the struggle for unification! You may even meet some of the era’s greatest generals along the way…

▼Game Flow
Earn money by having your villagers make goods to sell to visiting travellers. Defeat warlords or use items to acquire new territory and expand your village.

▼Unify Japan
As the game advances, your villagers will be able to join the shogun’s forces in battle. Send them to fight regional warlords and help unify Japan under the shogunate.

▼Increasing Villagers
Local lords join your village if you defeat them in battle. Defeating warlords can reveal other potential villagers who will join you if the price is right.

▼Training Villagers
You can spend money to strengthen your villagers through training, raising their levels and making battles easier to win. Some may also learn new skills.

▼Travellers
You can earn money by selling travellers food from your fields or goods from your shops. New visitors may appear whenever you defeat a warlord.

▼Shops and Goods
Workshops produce goods from raw materials transported there, and those goods are then sold in nearby shops. The closer a workshop is to the source of materials, the more efficient its production. 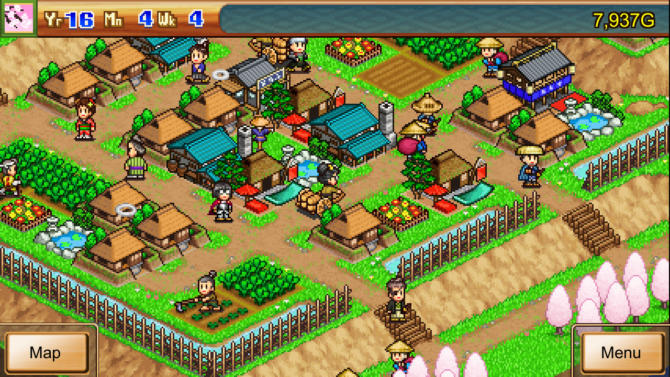