Covering one of the most catastrophic events in human history, Making History: The First World War offers a strategic level experience in a turn-based global game of conflict. It’s a war between the Great Powers of the age, each straddling to one degree or another, the old world and the new.

This is the moment when the industrialization of warfare became fully realized and the Great Powers mobilized their entire nations for total war. The introduction of new weapons with massive destructive power driven by machine era technology and mass production led to the death of many millions and the collapse of several storied empires.

Making History: The First World War is a game of conquest and economic management. Players make all the governing decisions for their nation. Historic events are there to direct the game along a WWI timeline providing the historical context and drama associated with the era. However as with any Making History game, it’s players who make history and create brand new worlds.

As the leader of France, fight to survive the continental ambitions of the German Empire. Play Germany and instigate Russian social unrest that might knock them out of the war early. Can you keep the Ottoman Empire from being partitioned? Will simmering ethnic nationalism cause Austria-Hungary to collapse and usher forth new nations in Central Europe? Use the most powerful navy on earth to maintain your vast colonial empire as the leader of the United Kingdom. Each nation you choose to play comes with a different set of strategic challenges.

Strategic Level Gameplay
The game map is divided up into over 2000 land and water regions covering all the continents and seas. Play as any independent nation of the WWI era and control your nation’s economy, military and domestic policies.

Infrastructure Expansion
Prospect, expand and exploit the strategic resources needed to feed an industrialized economy. Build railroads to move commodities and speed the movement of troops to the frontlines. Construct Fortresses, Trenches and Coastal Batteries to defend your nation from attack.

City Development
Your cities are key industrial assets that can simultaneously produce multiple output types. They generate wealth for your government, supplies for your people and steel for your military. Order your city to establish new factories, centers of research and health and a variety of manufacturing facilities.

Mobilization
Prepare for war by training manpower resources in times of peace. Mobilize your trained reserves at the right moment to get an advantage on your enemies. When the fighting ends, demobilize your units to a lower strength allowing manpower to return to work.

World War I Combat
Bombard your enemies from afar, then invade with Infantry and armor. Use observation balloons and aircraft to increase artillery accuracy. Deploy submarines and naval mines to sink and harass the enemies navy. Dig deep trench networks and defend your ground with machine gun units.

Regional Demographics
Each region has a defined identity representing nationality, culture, religion and multiple ethnicities. Governing support is tied to policies and the ideology of the population. High levels of radicalism can lead to unrest and revolutions.

Global Trade
Use the World Market to trade for needed supplies and sell your commodities to increase your income. Initiate a policy of Unrestricted Submarine Warfare against your enemies trade paths to interdict and sink their merchant fleets.

Historical Events
Hundreds of scripted events associated with the important moments and events during the war. Alternative historical paths are also covered that allow players to explore many what-if outcomes.

National Units
Each nation has a unique set of units that closely represent the uniforms and equipment of in the first decades of the 20th century. 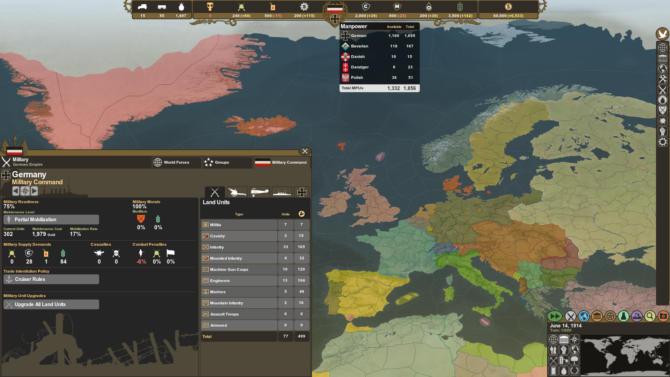 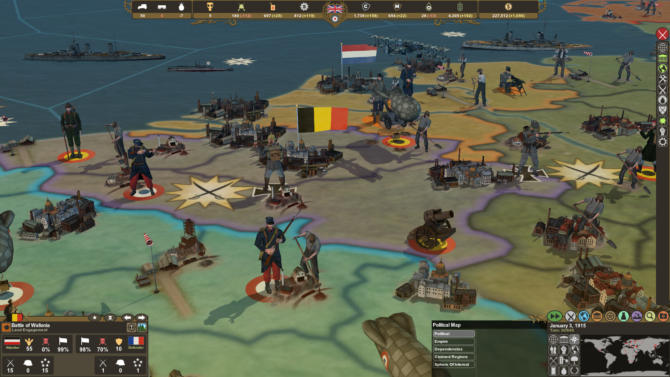 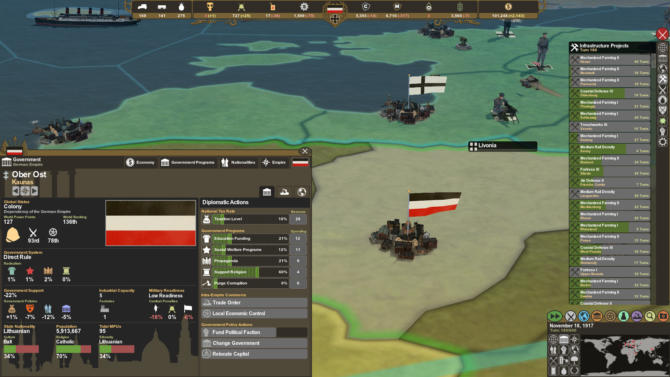